Does Scotland Really Have Fairies?

“When the first baby laughed for the first time, its laugh broke into a thousand pieces, and they all went skipping about, and that was the beginning of fairies.”
~ Sir J. M. Barrie, Scottish journalist, writer, and dramatist (1860-1937) 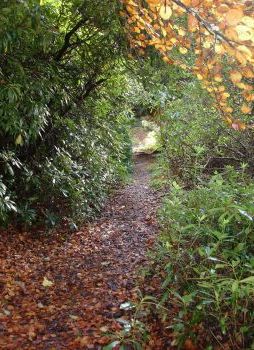 One autumn afternoon in Edinburgh, I tiptoed round a centuries-old close—a passageway or courtyard—trying not to infringe on anyone’s privacy as I snapped a few photos of ivy-covered walls.

A small woman of perhaps sixty was busily tending the potted plants outside her door. Her gray hair was caught in a clip on the crown of her head, and her blue eyes shone with an inquisitive gaze.

After we exchanged pleasantries, she wanted to know why I’d come to Scotland.

“Doing research for a novel,” I explained.

Minutes later I walked through the arched door of her two-story dwelling, stunned that a complete stranger would invite me into her home for a cup of tea. 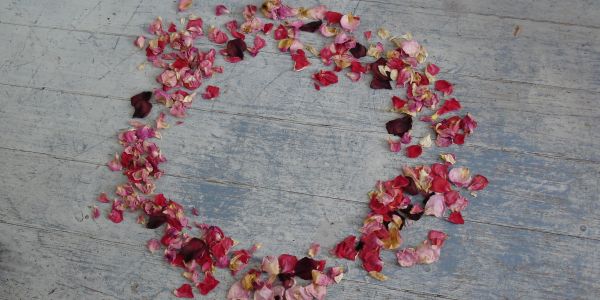 As I took my seat, she gestured toward a circle of pink rose petals on the bare wooden floor. “Had I known you were coming,” she said, “I would have spelled out your name.”

“Ohh,” I sighed, imagining how she might have formed the letter L in her flowery script.

Her nimble hands ever busy, she showed me an intricately patterned sweater she was knitting for a friend, then described how she’d affixed pressed flowers to her mantelpiece using some mysterious process involving glue and a coating of polyurethane. I confess I began to wonder if she had fairies living at the bottom of her garden. Not that I believe in the wee folk, mind you. But how else to explain this whimsical, charming woman existing in our modern world?

She was kindness itself, offering a plate of shortbread along with a lively show-and-tell of her many creations. We chatted about books and art, about gardens and food, about the Bible and the wisdom it contains.

When I stepped back outside, blinking in the sunlight, her house nearly disappeared behind the greenery. It didn’t look quite like this, but not far from it. Had I sipped tea with a fairy? No. My new friend was delightfully eccentric, but very much of this realm. Still, I was in Scotland, a country brimming with fairy lore.

The farther north into the Highlands you venture, the more likely you are to hear about fairies. You’ll also stumble upon place names like Fairy Glen on the Isle of Skye. With its many small lochs and cone-shaped hillocks. the glen looks like an entire landscape done in miniature. Perfect for…aye. Eve Blantyre Simpson, in her book, Folk Lore in Lowland Scotland (1908), told of a learned gentleman who was asked if he believed in fairies. The Highlander replied as gravely as if his confession of faith had been challenged, “Of course I do.”

Even people with strong religious beliefs embraced the notion of fairies, kelpies, and brownies in centuries past. Scottish fairy lore is rich with descriptions of the creatures and their habits. Fairies, it seems, are mischievous and not to be trusted. Cross a fairy and you may find yourself elf-shot. In my fourth Scottish historical novel, Grace in Thine Eyes, Davina McKie is a young woman of seventeen who has lost the ability to speak, yet finds myriad ways to communicate. Here’s a brief exchange from chapter twelve:

Davina held out the page with its single, bold question: Have you ever seen a fairy?

Her mother, Leana, considered Davina’s diminutive height, her fair complexion and luxuriant red hair, her gift for music, her playful nature, and her penchant for green dresses. Aye, and her utter silence. Fairy motion was said to be soundless.

“Have I ever seen a fairy?” Leana traced her daughter’s freckled cheek with maternal affection. “Only when I look at you.”

Whether covered in moss or Scottish bluebells, gardeners of old trod across small clearings with care, lest they disturb the fairies that gathered there to dance. I didn’t spy a single flutter of wings round this promising spot near Eilean Donan Castle in the Highlands. Does Scotland really have fairies? Davina didn’t think so. Her cousin asked her, “Wherever did you see the wee folk?” Davina winked and pointed to her head. Only in here, lass.

“Up the airy mountain,
Down the rushy glen,
We daren’t go a-hunting
For fear of little men.”
~William Allingham, Irish poet and editor (1824-1889)

I find the topic of fairies intriguing, if only because it shows us how people over the centuries have yearned for a world beyond the natural one. You can study the fairy lore of old in classic books like Scottish Fairy and Folk Tales by George Douglas, An Illustrated Treasury of Scottish Folk and Fairy Tales by Theresa Breslin, and The Fairy Faith in Celtic Countries by Walter Yeeling Evans-Wentz.

I’ll close with a sprinkling of fairy-themed poetry and an invitation to leave a comment regarding this question: From the Tooth Fairy to Tinkerbell, did you ever believe in fairies? “Fairies use flowers for their charactery.”
~ William Shakespeare, English dramatist and poet (1564-1616)

“Be secret and discreet; the fairy favors are lost when not concealed.”
~  John Dryden, English poet and dramatist (1631-1700)

“The dances ended, all the fairy train
For pinks and daisies search’d the flow’ry plain.”
~ Alexander Pope, English poet and critic (1688-1744)

Have the latest blog posts delivered to your inbox!